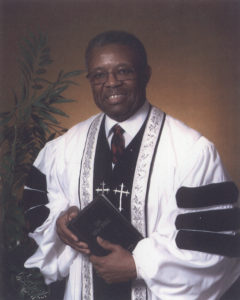 Pastor Yates has been faithful, prayerful and purposeful in guiding the congregation through God’s vision for Union Baptist Church. Through the guidance of the Holy Spirit, Pastor Yates has sought to bring progressive leadership and spiritual enlightenment to his flock. The congregation’s membership has grown significantly in souls since 1988.

In the words of congregational members, Pastor Yates has the natural ability to reach out to lighten one’s burdens and to soothe one’s soul. He is a “people person” who is not content with the status quo. He relates to all segments of a diverse church population in a positive way. He is one who seeks to serve this present age, his calling to fulfill: to do his Master’s will by promoting outreach in instances that extend beyond the doors of Union to uplift fallen humanity.

Since being called to Union, Pastor Yates has planted numerous ministries, designed to serve the growing needs of the membership and community. A few of those ministries are:

Pastor Yates earned a Bachelor of Arts Degree in Political Science from Kansas State University in Manhattan, Kansas, and he pursued a Bachelor of Arts Degree in Bible Ministries at Manhattan Christian College. He earned a Master of Arts Degree in Counseling and Guidance and Student Personnel Services from the University of Alabama and his doctoral degree (PhD) in Education with a concentration in Counseling Psychology from Kansas State University in 1978. In June 2011, he received an Honorary Doctorate of Sacred Theology from Temple Bible College and Seminary, Cincinnati, OH. His travels abroad include his visit and ministry in the Holy Land of Israel.

Pastor Yates has been the recipient of numerous awards, honors, resolutions and special recognition for his outstanding religious and community service.

Pastor Yates is married to the former Margie Hosea and is the proud father of two sons, Kenneth Yates and Jeremy Yates.